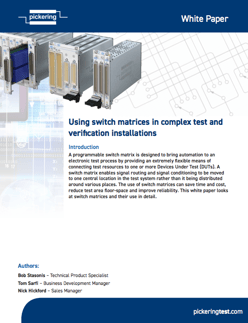 systems, especially in demanding industries such as aerospace, defense, automotive and semiconductor manufacturing. These matrices help accelerate test times over a manual process for test and facilitate reliable, repeatable and accurate results by eliminating error-prone manual intervention. The use of switch matrices can also help consolidate test processes in one space, rather than be distributed around several locations. Depending on the matrix type, it can also simplify the efforts to add additional test programs to the test system because of its ‘any test point to any instrument’ capability. There are limitations on simultaneous multipoint access as well as bandwidth. But proper matrix selection can shrink your test system and make it more flexible for today and into the future.

There are specific things you can think about to help you to understand how the use of switch matrices can save time and cost, reduce test area floor-space and improve reliability. These include what type of matrix to use whether it be crosspoint, tree multiplexer, RF and Microwave etc. You also want to understand how to configure a large matrix where software packages like Pickering’s signal routing software, Switch Path Manager (SPM), can simplify this programming effort. The maintenance of a switching system to avoid vulnerable positions and much more must also be included in your test strategy.

To learn more on this subject, check out our newest white paper here:  Using switch matrices in complex test and verification installations

For more information take a look at our updated SwitchMate Book.  If you have questions please contact us. 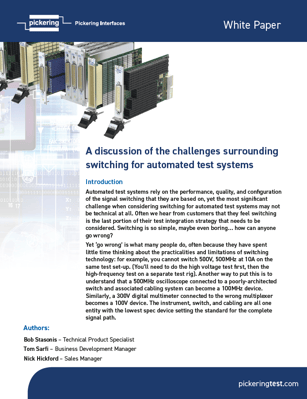 Automated test systems rely on the performance, quality, and configuration of the signal switching that they are based on, yet the most significant challenge when considering switching for automated test systems may not be technical at all. Often we hear from customers that they feel switching is the last portion of their test integration strategy that needs to be considered. Switching is so simple, maybe even boring… how can anyone go wrong?

Think about the questions you should ask yourself surrounding switching for automated test systems such as:

The switching system is intrinsic to the success of the test process, so it’s important to understand the possibilities and limitations. However dull switching may seem, there are very many challenges to be considered, but the information is all here to help you. To learn more on this subject, check out our newest white paper here:  The challenges surrounding switching for automated test systems

To learn more, take a look at our updated SwitchMate Book or if you have questions please contact us.

If you think about it, sensors control much of our daily lives. Sensors ensure that the food in your refrigerator stays cold, 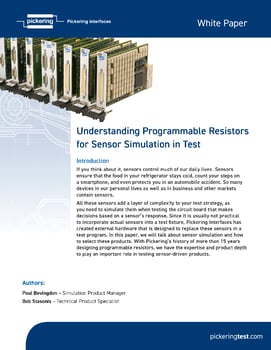 count your steps on a smartphone, and even protects you in an automobile accident. So many devices in our personal lives as well as in business and other markets contain sensors.

All these sensors add a layer of complexity to your test strategy, as you need to simulate them when testing the circuit board that makes decisions based on a sensor’s response. Since it is usually not practical to incorporate actual sensors into a test fixture, Pickering Interfaces has created external hardware that is designed to replace these sensors in a test program. In this paper, we will talk about sensor simulation and how to select these products. With Pickering’s history of more than 15 years designing programmable resistors, we have the expertise and product depth to play an important role in testing sensor-driven products.

Learn the right questions to ask when testing sensor-driven products.

As you can see, there are many things to consider when selecting programmable resistor modules in test. It is undeniable that sensors are in virtually every application for electronics, making testing important, and sensor simulation can help you get there. We recommend you take a look at our latest whitepaper -

To learn more, take a look at our web page: Programmable Resistor Solutions for Sensor Simulation or contact our simulation application engineers.

What is a Programmable Resistor?

A programmable resistor is designed to emulate the use of resistive sensors and variable resistors in systems when testing devices such as engine controllers.

Programmable resistors have many applications in automated test, verification and simulation systems:

Our entire range use real resistors, they do not use current loads or other electronic means to control the resistance value. Therefore they behave in exactly the same way as an actual resistor.

We carry over 130 PXI modules and over 120 PCI cards featuring:

You can also learn more about programmable resistors on our knowledgebase, feel free to contact one of our simulation engineers for more information or...